Categories: Atomic Future, General, Movies
Engdame – Bronx Lotta Finale (1983) directed Joe D’Amato. Original title : Endgame – Bronx Lotta Finale
Sarring Al Cliver (Warriors of the Year 2072, 2020 Texas Gladiators), Laura Gemser / Moira Chen (Black Emnanuele and 28 other Joe D’Amato’s films), George Eastman / Luigi Montefiori (about every post-apocalyptic movie ever made in Italy), Hal Yamanouchi (2019 After the Fall of New York, The Wolverine), Gordon Mitchell (Le Coup du parapluie)
In 2025, World War III has caused a nuclear holocaust. The United States is governed by a dictatorship. To entertain the masses, the totalitarian state has created the ENDGAME, where modern gladiators fight in televised duels to the death. Ron Sherman est le champion de cette arène moderne. He is recruited by Lilith, a beautiful mutant with telepathic abilities, to escort her and her companions out of the contaminated ruins of New York, and across the wasteland. Shannon gathers a crew of fearless fighters to protect the mutants and to face the many dangers they will encounter on the mission.
Features :
Endgame – Bronx Lotta Finale Endgame may be seen as a pound shop Mad Max / Escape From New York / Rollerball combo, but it’s also, in retrospect, rather compelling and prescient. It’s odd mixture of genres, sub-genres and exploitation tropes sets it apart from more obvious knock-offs that were endlessly churned out by Italy’s film industry during the 1980’s. Ironically, what was once very much the edge of film entertainment – that netherworld of horror, sci-fi, smut and exploitation – now very much resides in the mainstream, with many of today’s movies mixing the same outlandish elements with far superior budgets (but not necessarily greater results!) Post-apocalyptic fans have declared Endgame a must-see for the genre. The film was never released in HD, and not even on DVD in many countries (including France). Finally, restored form a brand new 4K scan, it can be seen in all its glory thanks to a proper Blu-ray / DVD combo, worthy of the expectations conjured by its cult artwork.
Les Prédateurs du futur (1983)de Ruggero Deodato Titre original : I predatori di Atlantide en combo blu-ray/DVD.
After creating a scandal with his gore masterpieceCannibal Holocaust and directingHouse on the Edge of the Park (forbidden for 20 years in the UK), Ruggero Deodato turns himself to the new fashionable genre: post-apocalyptic cinema. Simultenously an adventure film, a non-stop action flick and a science-fiction movie, Atlantis Interceptorsis one of the most appreciated of allMad Max II lookalikes,, and a fun and spectacular manifest of the Italian craftsmanship for exploitation cinema. You must have seen You must have seen Atlantis Interceptors before the world ends! … And look around, you shall decided yourself quickly, because the Apocalypse is coming.
Features
2072 Les Mercenaires du futur (1984) Titre original : I guerrieri dell’anno 2072. de Lucio Fulci en combo blu-ray/DVD.
Welcome to the year 2072, in a society fascinated by violence. To entertain the masses, the Rome from the future has reinvented the circus games. The new gladiators are now gathered in front of the television cameras. Between post-apocalyptic and dystopia, between Mad Max and Running Man, Warriors of the Year 2072 allows the great Lucio Fulci ( (City of the Living Dead,, The Beyond,, The House by the Cemetery...) to extend his repertoire. Cheesy costumes, futuristic glitter and social critic are combined together, in a film than deserves to be rediscovered within the career of its famous director.. Warriors of the Year 2072 in a film than deserves to be rediscovered within the career of its famous director.
Features : 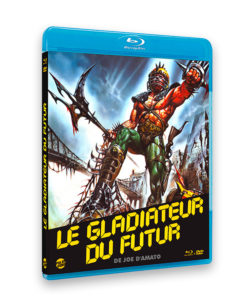